The Writer looks around her at the silent gathering. “I shall begin.”

What does that word even mean? Doesn’t it mean that you are going to be off for a while?

Consider yourself told. I am. Fare ye well in the time I am gone. I may be gone for a month; or it may be a day. Or an instant.

However long it is, however, consider yourself warned.

“‘Twas brief, but little time have I.” And the Writer steps out; and it is night.

The Writer steps forward. The wind whips her hair into her face, but she does not react. She smiles at her assembled friends, and opens her pale lips to speak. “Description – the art of lyrical language – is difficult to achieve without being overdone.” Another speaks up timidly. “Show us an example!” Her response is immediate. “How can I? But, for you, I shall try…”

The wind whispered through the trees, sighing, sobbing, singing. No one was there to see it; no one and everyone. All the world would have been standing there, their eager faces staining the dark waters, if they had but known what was about to happen.

The wind touched the water. It sang to the rivers, and the rivers sang back with a melody that was all their own, beautiful, lonely, everlasting. The wind ruffled the water as it did the leaves, deep in their drifts, in the time of autumn, of destruction, of beautiful, noble descruction. The water rippled softly, and struck the edge of the bank. The soft earth crumbled and fell to the water with the softest of sounds. Slowly some moss, a dark green and foreign to the water, slipped into the river. It rushed over it, picked it up, and now the moss was tumbled over and over in the water, flying through that alien underground world. A fish tried to eat it. It was a pity for the fish that the moss was toxic.

The wind swooped up, flinging rose petals into the air, so that they drifted, drifted and fell gently to the water. The bright colours kissed the liquid, like the eyes of a seal, limpid and helpless, and then the dark, powerful whirlpool snatched them, whirling them under the surface, away, away, lost.

“You mean that’s your descriptive passage?” questions her friend. The Writer nods. “It is indeed; although a poor effort.” She rises, and stands looking down at them. Then she smiles. “Now it’s your turn.”

The Writer looks around. Her eyes are dark as she observes all those near her. They do not lighten. Then she reaches for her pen, and is drawn into the mysterious world of the Road of a Writer.

What do those words say to you? To me, they are unfathomable depths, beautiful and yet… empty. Meaningless. Because I know not how to use them in context.

That is quite right. I cannot write an emotional scene for the life of me. In my head, it is beautiful. On paper, it is flat. I cannot write it to be more real. Never! though I would wish so to do.

But I am drawn to it. Drawn to writing about passion, love and sorrow. But even more, to write about my own experiences. Changed, yes. Romanticised, yes. Hidden behind another character, yes. But my experiences, nonetheless.

Yet what is the point, if I cannot write it? It looks fake. As if I am one of those people who can sit there, smiling, in golden afternoons. And that is all they do. But I am not. I… I cannot say where I have been, what I have done. Suffice it to say that I have so done. I have defended my point of view. I have been persecuted by others.

Not to say that I am a martyr; not in the least. But I am emotionally disturbed by such incidents. When it goes on long enough, teasing becomes cruelty, destruction. It destroys and has destroyed.

I cannot write emotional scenes. I can only write happy. Yet still I shall try. For is that not the true Road of a Writer?

And the Writer rises without a sound, looks around the firelight and steps out. She leaves no trace of her going, only a whispering wind.

A dim mist enshrouds the earth and the vision of all. For an instant dark valleys and soaring white peaks can be seen, then the earth is dark once more. A maiden, her figure spoilt by many defects, steps whitely out of the gloom. Her words are soft as she speaks, seeing the amazement, and almost fear, of all. “Do you not know me? I am the Writer.” Then she smiles and turns, her hair strangely coloured in the faintly greenish light, and her face pale as death. She holds out one slim white hand. “Come with me.” 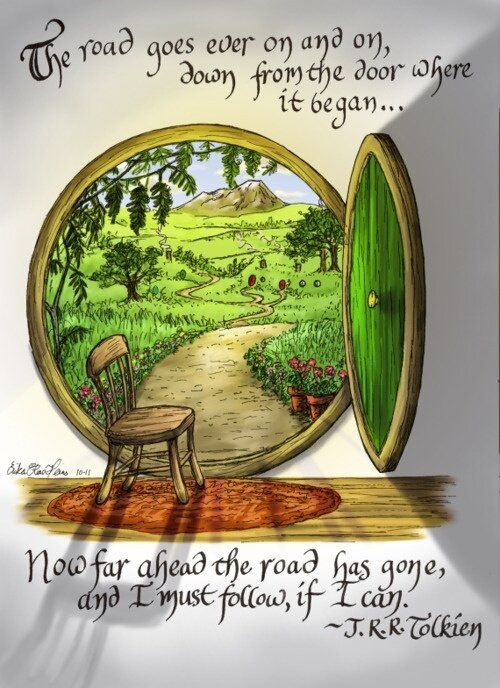 Do you know this quote?

Have you ever thought about how true it is?

The road will never stop. Wherever you do, if you fall by the wayside, even there it goes on, just without you.

Do you really want to fall by the wayside?

Now, chances are that if you are here you want to learn to write. Or at least to see the struggles of a fellow writer.

Do you really want to be one of those ‘also-rans’ who tried and tried to be an author, tried to write good stuff, then gave up? Stopped doing it, and never has another chance, because life got in the way?

Or do you want to be chasing your dream, on and on? To follow the road of a writer?

Join me. We can accomplish more together than alone.

The Writer sweeps her cloak around her and leaves, hidden by the mist. The words drift faintly back. “Join me…”